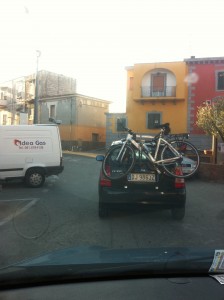 My current training program involves waking up at the crack of dawn and since it’s impossible to drive anywhere within Naples (crazy drivers and roads), I have to put my bike on the back of my car and drive an hour out into the countryside. This is actually proving challenging for me, as I’m usually a night person and have never done well waking up early but I’m slowly retraining my body to accustom to it.

At the moment, I cycle 4 times a week.  This is the minimum suggested for building both strength and endurance. During the week, when I have to work in the afternoons/evenings, I cycle 4 – 5 hours. My current speed average is 25 kilometers an hour, though I’ll be steadily working up to 30, which is the average for an athlete. On the weekends, I go for much longer. I’ve been adding 5 kilometers a week, slowly working up to much greater mileage and longer endurance runs.

Stretching after each ride is essential. I’ve found that yoga stretches help a lot, as the back in particular suffers during long rides in the same bent position. I wish I had a masseuse! My energy also peaks every 20 – 25 kilometers, so I carry snacks such as fruit, chocolate and energy bars to munch on every hour. Every 40 – 50 kilometers I’ll eat something more substantial such as a sandwich with lots of protein in it. I also put essential salts in my water, as cycling in the sun can deplete and dehydrate pretty quickly.

The days are still hot, averaging over 30 degrees centigrade, so even though I get an early start, by midday the sun is scorching. Yesterday, I lost too much salt and got home feeling really ill, with an urge to vomit. The first assumption was that I was dehydrated, but in fact, it was the opposite. I’d drunk too much and was bordering on hyponatremia. Sodium requirements are directly linked to the individual hydration levels, so I’m having to figure out the correct quantity to ingest during long rides. Since I’ve only really cycled in hot weather, I’ll be interested to see how I do when winter temperatures set in.

For more info on salt and water intake for athletes, there’s a very informative article here.