What Can Possibly Go Wrong?

Taquari The first day in India starts with a literal bang. Trying to get out of Kolkata, weaving through the seething, moving chaos of trucks, motorbikes, buses, rickshaws, bikes laden with pots, animals and merchandise, pedestrians, dogs, cows, goats, garbage, potholes. Everywhere an interminable stench of rotting rubbish, feces and incense.

Between a truck coming up on my right and a dog on my left, a man suddenly darts out into the street directly in my path, sees me two feet away and freezes. There is nowhere to swerve to avoid him. ‘Move! Move! Move!’ I yell seconds before impact. The collision sends Pegasus and I sprawling across the dusty asphalt.

‘Are you crazy?’ I shout more from the surprise of hitting the guy than anything else. He scampers away unfazed, while I pick up Pegasus and realign his chain. ‘People with a death wish….’ I mutter and shakily remount, ignoring the blood dripping down my shin, desperate to get out of this death trap and onto the open road. It takes over two hours to maneuver my way out of the city. Forty kilometers later, I still have not eaten breakfast, so I pull over at a little roadside truck stop restaurant for chai tea and biscuits.  While I eat, a small crowd gathers around Pegasus, pinching and prodding the tires as though testing fruit for ripeness.

“Expensive?” they ask in the international sign language for money, rubbing fingers and thumb together.

This quickly becomes a theme. Each time I stop, the crowd swoops in. At first I feel nervous and claustrophobic, like the monkey in a cage, till I begin to understand that all the attention is over my bike. Pegasus is a two-wheel rock star. People gather just to touch his tires. Even covered in dust and filth, compared to the rusty one-gear contraptions they all ride, he stands out like the Ferrari of bicycles. Naturally, I never let him out of my sight, even taking him into the toilets with me.

A hundred and twenty kilometers on, I am growing desperately hungry and thirsty, and feeling the effects of the sun. I turn off at the next little town I pass to find food and water. There is a national festival on, crowds of men with orange powder smeared down their foreheads block the road waving three-foot long sabers to the rhythm of drums. It is a public holiday and everything is shut apart from a few filthy roadside stalls cooking food next to piles of rubbish and mangey street dogs, everything covered in flies. When I find an actual restaurant that looks open, I am told that food is not served till night.

I must pull off pathetic pretty good. They take pity and offer some leftover Biryani from the day before. I shovel down the fragrant yellow rice while the owner, cook and waiter sit on a row of plastic chairs watching me eat.

When I’ve finished, I ask for the toilet and one of them escort me through a dark, cavernous hole full of rubbish and pots that is the kitchen. The waiter points to a drain in the corner, “there”.

I realise with horror that they do their “business” in the same place where they cook the food I have just eaten.

‘Never mind.’ I smile weakly and briefly consider retching up my lunch. Meanwhile, the cook has mounted Pegasus and taken a wobbly spin around the little cement courtyard. I let out a yelp when he nearly crashes it into the wall.

‘Uh, thank you for the food.’ I tell them, a possessive hand on Pegasus’ handlebar. ‘I really should be going.’

Back on the road, and pedaling out of town towards the highway, I am accosted a couple youth on a motorbike. They are dressed like Bollywood sidekicks in collared shirts unbuttoned half way down their chests and tucked into tight jeans, hair strangely gelled and aviator sunglasses. One of them calls out, “madam, stop a moment!”

They follow me down the road with frustrating persistence. “Please madam, we just want to take photos with you.”

When it’s clear they aren’t going to leave me alone, I pull over. A second motorbike putters up with two more guys and the four youths take turns posing around me, the photographer commenting between snaps, ‘Oh very sexy.’

I finally get rid of them and back on the road. The sun starts setting at four and by five it is almost dark, so I turn off for the nearest little town, Belda.

In the only hotel, a vociferous argument is taking place between the manager and a cross-eyed old hag. They are too absorbed in the heated exchange to notice me enter. A huddle of mustached spectators sit around laughing and commenting.

After waiting a good fifteen minutes, I plant myself impatiently in front of the manager’s desk. He stares up with a distinctly hostile look as if I have no business standing there.

‘How many in your party?’

‘You? Alone?’ He stares in disbelief. 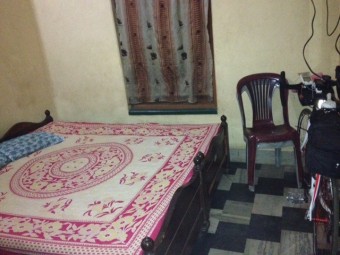 One of the onlookers say something in Hindi, the discernible word being “cycle”. The manager looks from me to Pegasus and a rumbling sound comes out of him. Laughter. Apparently this is the most ridiculous thing he has ever heard. Shaking his head and mumbling imperceptibly, he laboriously puts me through the registration formalities and I am led to a room with browning walls, dusty floors, bare mattress, a clothesline slung from wall to wall, no toiletpaper or soap. I go back to the front desk and make the motions of putting a sheet on the bed. The manager rolls his eyes and calls the assistant who reluctantly drags himself over.

Meantime, the old hag has dashed to the linen cupboard, pulled out some bedding and rushed into my room, leaping lightly onto the bed and throwing out the sheet like a fisherman casting a net. The assistant, roused by her actions, follows just a few seconds behind and with a single movement, tears off the sheet she has just laid. This sets off a volley of unintelligible expletives which he fires back just as rapidly and chases her from the room with one threatening hand raised. The hag carries on a screeching tirade in the hall, while he slowly and methodically makes up the bed. Though I cannot understand a word, the entire spectacle is pure entertainment.

They finally leave, I go to lock the door and discover there is no key. When I go back to the front desk to ask for it, the manager pretends not to understand. I act out a key being turned in a lock. He shrugs and waves a hand, ‘don’t worry about it.’ I am plenty worried about it. ‘Sir, I must have a key. I will not sleep the night with an unlocked door.’ He grudgingly pulls open a drawer and hands it over.

Back in my room, I find the hag waiting in the door frame, one hand outstretched and the other pointing to her palm. I close and lock the door, vaguely wondering what will await me when I open the it again on tomorrow?

I needn’t have wondered. Come 6:00am I am awakened by the doorknob slowly turning. When whomever is on the other side finds it locked they start to pound their fist against the wood instead. I pull the door open with some displeasure, and there is the importunate old hag, still pointing to her palm. I decide the argument of the previous night likely had something to do with her disturbing the clientele.

An auspicious start to the second day, which takes a flying nosedive from there. The Biryani of the day before has taken effect. I’d woken in the night, my stomach an internal tsunami and spent half of it on the toilet. I know I risk severe dehydration cycling in the heat without food or water in my stomach, but I am not staying another day in that hotel of horrors, so I pack up and decide to try and reach Baleshwar, 100 km away. They are the longest 100 kilometers I have ever cycled. I have not eaten or drunk since yesterday, my head is pounding and my stomach is getting ready to either implode or explode.

‘No. I don’t know if I can go on. I have to crap so badly I can hardly pedal anymore.’

The sound that comes out of me is somewhere between a cry and a laugh. ‘Where?! I am literally on a highway in the middle of nowhere.’ I am not about to squat by roadside alla Indian. I keep on pedaling, dizzy from the heat and the excruciating pain in my stomach. Antonio calls again.

‘Ju, I’ve booked you into a clean hotel in Baleshwar. Just try to reach there and you can rest.’ I wonder what planet he is on. A lot of sarcastic replies come to mind.

‘Kay.’ Is all I manage and hang up. I have to stop every few kilometers, one leg wrapped tightly around the other like a liquorice stick while my stomach rumbles and shakes with the early stirrings of an intestinal eruption. By the time I enter Baleshwar, there is no more restraining it. Right in the middle of the street, it explodes. Literally and publicly. I run cross-legged into the first hotel I see.

The old, turbaned man at reception points wordlessly to a white door at the end of the hall. The horrifying ordeal which follows would need the entire alphabet to describe. A is for awful, B is for bust, C for chagrin, D for disgust…

I have hit the lowest point yet. Veritable rock bottom. Washing out my pants in the toilet, I just start laughing. It’s one of those scenarios you hear about, but never imagine could happen to you. I have shit myself like a baby at 31 years old. It can’t get much worse than this, can it? Fortunately, the bathroom has a shower and I use it. Putting my wet clothes back on, I emerge nearly half an hour later, looking sheepish.

‘Thank you.’ I mumble to the man behind the desk, my pride completely pulverised.

‘Ten rupees.’ He answers. I fish out the cost of my shame and quickly slink out.

Three months in… Storie on the road…