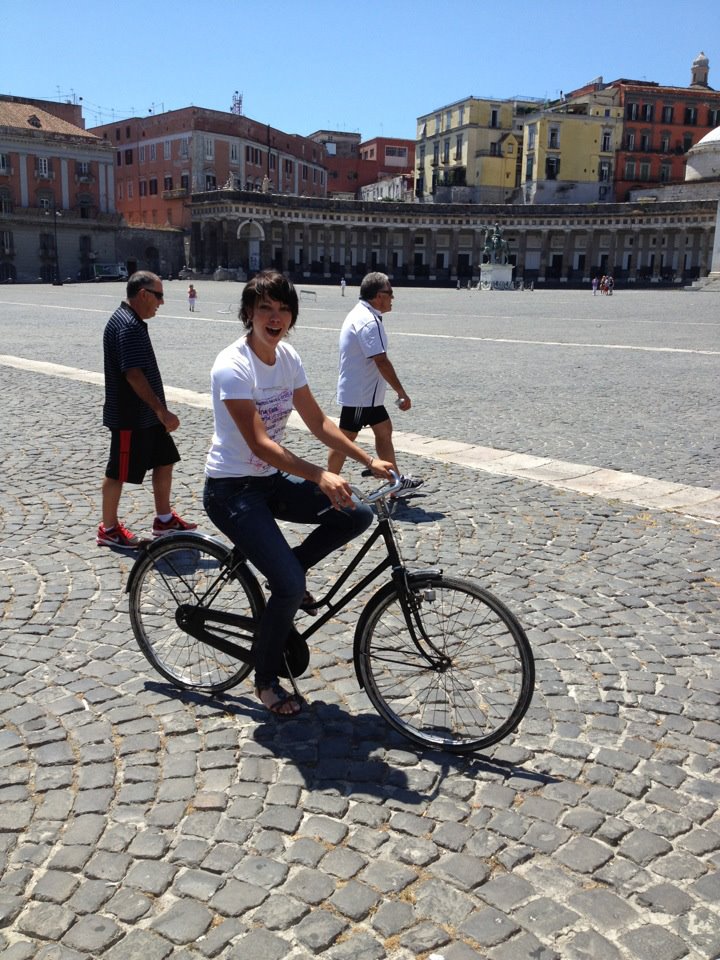 At long last departure day is just around the corner. People keep telling me the hardest part is leaving, and this has certainly proved to be the case. From the beginning, finding sponsorship for this endeavor has proved difficult. Were it not for the generous donations of friends and well-wishers, even getting to this point might have been a lot more painful. Nonetheless, for this, and numerous other reasons, my date of departure had to be continually pushed back until I decided, it must be now, or never. So, still without the money in from sponsors, I am leaving on the 23rd of July, effectively sawing off the limb, stepping into the unknown, leap of faith, blah blah blah. Time to stop talking and start pedaling.

A week ago, my logistics manager, Antonio, was contacted by the mayor of San Giorgo A Cremano, a town on the periphery of Naples, birthplace of the late Massimo Troisi. He asked whether I would be interested in finishing up my cycle riding into Massimo’s hometown on his bicycle, the very same famously used in his last film, Il Postino. Would I??? What an honor it will be! Incidentally, it was also the film which launched the career of Maria Grazia Cucinotta, who will be there at the start and finish line. Of course, this has helped to stir up the interest and imagination of the Italian media, which may help in the quest for picking up sponsors along the way. I got to ride the classic old bike around Piazza Plebiscito. The seat is low, the handlebars high, there are no gears and my knees knocked against the handles. It was beautiful.
These days, I am cycling 200 km a day, in 38 degree heat, breaking a serious sweat, but overall feeling good. My bike, Pegasus, went through an overhaul, that is to say, I decided to go for a much lighter model. I need speed and a light bike will mean the difference between 9 hours and 12 to cover the same distance. Pegasus the Second, weighs just under 7 kilos and hopefully with all baggage, no more than 16.

My final check in with Prof. Perna showed as follows: 10.5% body fat. ‘Perfect condition’, were his words. ‘You’re ready.’ I hope he is right.

Last and most importantly, I want to mention Antonio Zullo, the man with the game plan, my right arm and partner in crime, work and living. I first met Antonio just days after my arrival in Naples over 3 years ago. I walked into his pub with a friend where we were summarily harassed by a group of rowdy Napoletan youth. Antonio apologized for their impertinent behavior in English and how very glad I was to find an English speaker after wandering clueless for days, trying to make sense of the wilds of the south Italian metropolis. Antonio introduced me to Naples and I fell in love with the city. It was the start of a relationship that has spanned three years.

I’ve been asked why I chose Antonio as my logistics manager. Of all the things he has taught me most since knowing him, they are loyalty and human goodness. He might not be the most calming person to be around in an emergency, but if I get stuck in a jam somewhere across the world, he is the one person I can count on to raise heaven, hell and all the fates to get me out of it. Let’s hope it doesn’t come to that. When I first told him about my plan to cycle the world he laughed, looked at me, understood that I was serious and then proceeded to try and talk me out of the idea. Only after realizing that the more he talked, the more determined I became, he eventually gave up and threw his energies into helping me realize my dream. For all he has done, does and will do, I hope to one day repay him with more than my gratitude. He is one of the best men I’ve had the honor of knowing.

With just two weeks left, there is the inevitable rush and panic of trying to make sure nothing has been forgotten, everything is lined up, ready and set. Am I feeling excited? Not yet, but I’m pretty sure on the day I mount Pegasus and cycle out of the city for the last time, I’ll start thinking, ‘what in the name of all insanities have I gotten myself into this time?’